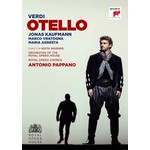 'Jonas Kaufmann Sings an 'Otello' for the Ages'- New York Times. On a sweltering night at London's Royal Opera House in June 2017, Jonas Kaufmann made his debut performance as Otello - one of the most coveted and challenging roles in the tenor operatic repertoire. The Guardian commented on his performance: "Kaufmann thrills in a dark, expres-sionistic staging". This new production by director Keith Warner presents a simultaneously modern and abstract approach to one of Verdi's greatest operas. The DVD and Blu-Ray will also include two short bonus features: - An introduction to the opera & a short feature about the music of the opera with the conductor and tenor.

"The heroes of the evening were Pappano, a firebrand in the pit drawing visceral orchestral playing, and Boris Kudlička's shapeshifting set, whose walls slide in and out - often manipulated by Iago, much as he manipulates the plot - to create different spaces" BachTrack

"Vratogna is in total command, vocally and dramatically, ever alert to the sinuous subtleties of Verdi's most flexible score, dark and menacing, and ruthless in his racist determination to destroy his man. He knows instinctively that all devious schemers can present a plausible face to the world while sowing seeds of doubt in malleable minds." the Guardian

"[Kaufmann] sings most arrestingly. His voice rings comfortably through the opening Esultate. Elsewhere, we find hushed pianissimos and careful dynamic control. Dio Mi Potevi is beautifully contained, the emotional agony suggested by the ebb and flow of inflections rather than melodramatic declamation" The Guardian

"In front of a sold-out Royal Opera House here, Mr. Kaufmann made his debut in the part, and he calmly, confidently sang it for the ages. His sound inescapably evokes memories of live performances and classic recordings by Vinay, Vickers and other masters; in a single night, he joined their company." New York Times