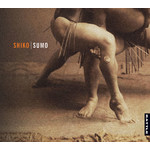 Sumo was formed in 2007 as a quartet with Richie Pickard on acoustic bass, Daniel Kennedy on drums, Gwyn Reynolds on sax, and Darren Pickering on piano. Dan chose the name, and their motto was 'heavy, sweaty jazz'. The band performed every week at Fat Eddies, a live music venue that was destroyed in the 2010/2011 earthquakes. Their first album, Throwing Salt (2009), was a Best Jazz Album finalist in the 2011 New Zealand Music Awards.

In 2016, Gwyn and Dan welcomed Michael Story (acoustic bass) and Joe McCallum (drums) into the line up. Shiko is based on the successful concept of the previous album, where the members of the quartet plus six guests each compose a tune featuring any combination of the ten-piece ensemble they choose.