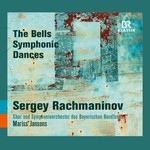 Two large symphonic tone poems by the Russian composer Sergei Rachmaninov can be experienced on this release: the four-movement symphonic poem 'The Bells' ('Kolokola') op 35, based on a poem by Edgar Allan Poe, for solo voices, choir and orchestra, composed in 1913, and the three 'Symphonic Dances' op 45 from 1940 - the last completed work by the composer, who died in 1943. These outstanding performances of significant compositions of the early 20th-century symphonic repertoire are conducted by Mariss Jansons.

"This superlative performance…is one of those stratospherically accomplished, 'cosmic' ones that Jansons says he is always trying to attain… Jansons has Rachmaninov in his very soul; but he is also able to capitalise on his remarkable ear for colour, clarity and atmosphere, coupled with his distinctive energy and probing depth of emotional understanding." Gramophone Recording of the Month April 2018

"This, then, is a virtuoso performance of Rachmaninov's last masterpiece though I think the engineers have made it even more of a full-on experience than it was in the Herkulessaal. I find much to admire in the performance." MusicWeb

"Brilliant conducting from Jansons, stupendous playing and singing from the Bavarian Radio Symphony Orchestra and Chorus and vocal soloists, and an astonishingly revealing recording add up to an urgent recommendation and a potential Want List candidate." Fanfare