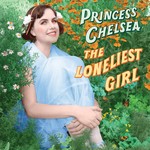 The Loneliest Girl is the third studio album by New Zealand musician Chelsea Nikkel, better known as Princess Chelsea. It was recorded by Chelsea between 2016 and 2017 in her home studio in West Auckland.

The Loneliest Girl examines the loneliness and ultimately the artistic satisfaction a strong work ethic can bring, the result of which is this eclectic collection of pop songs. As a studio-based artist, Chelsea was conscious of not wanting to fall too deep into a production hole for her third album and wanted to more than ever before capture moments of inspiration, madness and spontaneity on record.

A classically trained pianist, Nikkel lent her talents to self-professed "circus punk" act Teen Wolf in the mid-2000s, and later in the touring lineup of indie pop outfit the Brunettes. When she wasn't performing, she worked as a composer for a local recording studio, all the while refining her songwriting and production skills. Her full-length debut as Princess Chelsea, Lil' Golden Book, was released in late 2011 by New Zealand label Lil' Chief and included the viral YouTube hit "Cigarette Duet" (nearly 41 million views and counting). The album was a collection of songs about her youth presented with innocent melodies and baroque arrangements to create a musical fairy tale. The juxtaposition of her simple arrangements, childlike delivery and cynical wit is a significant and defining characteristic of her music.

Nikkel followed up with a synth-heavy sci-fi opera about a future world rendered helpless in the face of depression brought on by technology. The Great Cybernetic Depression was released by Lil' Chief and Flying Nun in June 2015. She also released a surprise album of covers in 2016 called Aftertouch, featuring covers by Nirvana, The Beatles, Interpol, Lucinda Williams and Marianne Faithfull.