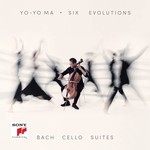 Sony Classical is proud to announce the release of Yo-Yo Ma's new album Six Evolutions - Bach Cello Suites, his third and final recording of these works. Bach and his Cellos Suites entered Yo-Yo Ma's life when he was four, when he learned the first measure of the Prélude to Suite No. 1 under his father's instruction. Ma has never lost his initial fascination.

"Bach's Cello Suites have been my constant musical companions," Ma writes of the music. "For almost six decades, they have given me sustenance, comfort and joy during times of stress, celebration and loss. What power does this music possess that even today, after three hundred years, it continues to help us navigate through troubled times?"

Ma is more convinced than ever of the suites' ability to create shared meaning that extends far beyond the here and now. The suites' collective vision - at once divergent and coherent, empathic and objective - reminds us of all that connects us despite an increasingly discordant public conversation.

The August release of Six Evolutions also signals the beginning of a two-year, six-continent journey in which Yo-Yo Ma will devote himself to Bach's music, playing all six Cello Suites in a single setting in familiar and unlikely locations.

Six Evolutions - Bach: Cello Suites will not only offer an essential encapsulation of what this music means now to one of the world's most celebrated artists, it begins a new chapter in the cellist's 58-year relationship with this music.

"The most affecting, dramatic and humane interpretation of this divine music that I have heard...Time and again Ma enlivens the suites' formal patterns with dazzlingly various textures and tones: husky, velvet, thrusting, singing…Instead of studiously tracking the music note for note, he's living inside it and the results are incomparably thrilling...Perfect." The Times

"By now, Ma's wings are fully grown. His capacity for soaring seems limitless, his ability to minutely alter dynamics and tempos at the least prompting and the joy of his lilting rhythms are inspirational. I don't think he has ever made a greater recording and his personal booklet notes help provide a conceptual setting for his playing." Gramophone Editor's Choice Awards Issue 2018