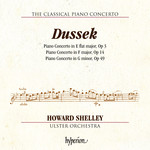 Howard Shelley's earlier release of Dussek concertos was described as 'a real find' (BBC Music Magazine). This successor is, if anything, even more impressive, culminating in one of the finest unknown piano concertos from the early nineteenth century.

"[Shelley] succeeds in convincing one that Dussek's powers of melodic invention are more fertile than is actually the case… It would be all too easy for Dussek's Mendelssohnian propensity for extended passages of semiquavers to pall, yet such is Shelley's velvet touch and sensitivity to exquisitely-shaded dynamics that it seems not a note too long. Providing the icing on the musical cake is the Ulster Orchestra, which responds with alacrity to Shelley's skilful direction." BBC Music Five Stars (Performance)

"Shelley handles the often intricate solo parts of these concertos with characteristic aplomb and stylishness…Dussek wrote little orchestral music beyond his concertos but the sympathetic collaboration of the Ulster orchestra showcases the increasing subtlety and sophistication of his handling of the orchestra." Gramophone Awards Issue 2018

"The three [works] recorded here, thanks to the zeal of Howard Shelley, have good things, and one of them, the powerful, proto-Romantic G minor, is surely worth taking into the repertoire" The Sunday Times