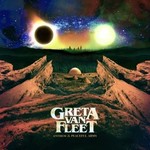 Anthem of the Peaceful Army follows the two 2017 EPs, Black Smoke Rising and From the Fires by these young Michigan rockers.

From The Fires (LP)