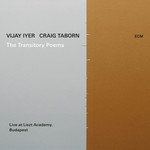 Vijay Iyer and Craig Taborn, two of creative music's most resourceful players, learned to meld and mesh their artistic approaches inside Roscoe Mitchell's Note Factory ensemble (as documented on Mitchell's 2007 recording Far Side). Since then, Iyer and Taborn have continued to play concerts together. The Transitory Poems, recorded live at the Franz Liszt Academy, Budapest, in March 2018, is their first duo album. A marvel of shared invention, it incorporates pieces offered as tributes to formative influences including pianists Cecil Taylor, Muhal Richard Abrams and Geri Allen, and the painter and sculptor Jack Whitten.