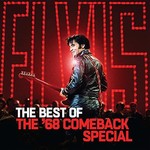 Elvis Presley
The Best Of The '68 Comeback Special

An ideal set for longtime Elvis fans and newcomers, "The Best of the '68 Comeback Special," comprises the Elvis recordings and performances that inspired the upcoming tribute.

The original special, recorded over several sessions in June 1968, featured Elvis playing the songs that mattered most to him, in his first live performance since 1961. When it aired on December 3, 1968, the special was the week's highest-viewed television program, re-establishing Elvis as a driving force in popular music. The special was recently revisited in 2018 in the 5CD/2 Blu-ray Disc box set '68 Comeback Special: 50th Anniversary Edition.

NBC's new two-hour program will pay tribute to Elvis Presley's "'68 Comeback Special," recreating the iconic night with musical performances, a showcase of rare footage and interviews with Pricilla Presley and Steve Binder, the director of the original special, plus a special appearance from Lisa Marie Presley.

"Elvis All-Star Tribute" is being produced by Ken Ehrlich for AEG Ehrlich Ventures, LLC. Ehrlich is one of event television's most prolific producers, from the annual Grammy Awards telecast, which he has produced since 1980, to numerous single artist and event specials including the Global Citizens Festival, which he produces for MSNBC.

Trouble/Guitar Man
Heartbreak Hotel
Hound Dog
All Shook Up
Can't Help Falling in Love
Jailhouse Rock
Don't Be Cruel
Blue Suede Shoes
Baby, What You Want Me to Do
Are You Lonesome Tonight?
One Night