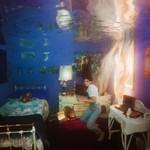 Californian Weyes Blood, otherwise known as Natalie Mering, has accomplished a lot in her 30 years. Always on the edge slightly, Titanic Rising has a wonderful etherial feel blended with psychedelic folkism. As much art as music, with a nod to her school years where she sang madrigals and Renaissance music, Weyes Blood is as comfortable with a simply melody as she is transcribing to a big cinematic landscape, but always with something poignant to say lyrically.
On Titanic Rising production is sensitive, more like a Carpenters or Enya feel, well polished and articulate which just make this quite a delicious listen.

Tellingly, Mering classifies Titanic Rising - which was written and recorded during the first half of 2018, after three albums and years of touring - as the Kinks meet WWII or Bob Seger meets Enya. The latter captures the album's wilful expansiveness ("You can tell there's not a guy pulling the strings in Enya's studio," she notes, admiringly). The former relays her imperative to connect with listeners. "The clarity of Bob Seger is unmistakable. I'm a big fan of conversational songwriting," she adds. "I just try to do that in a way that uses abstract imagery as well."