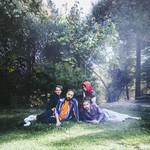 U.F.O.F., F standing for 'Friend', is the name of the highly anticipated third record by Big Thief and their first on 4AD.

U.F.O.F. was recorded in rural western Washington at Bear Creek Studios. In a large cabin-like room, the band set up their gear to track live with engineer Dom Monks and producer Andrew Sarlo, who was also behind their previous albums.

Having already lived these songs on tour, they were relaxed and ready to experiment. The raw material came quickly. Some songs were written only hours before recording and stretched out instantly, first take, vocals and all.

"exquisitely rendered folk-based songs are for the most part hushed and gentle, while their elliptical lyrics reveal a fascination with nature and the great outdoors." - 4/5 The Guardian