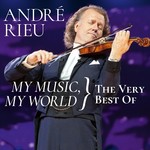 My Music, My World The Very Best Of
André Rieu

To celebrate his 70th birthday in October this year, André Rieu, the King of Waltz and one of the most famous violinists of our time, presents his first ever greatest hits collection.

"If one were to name a truly 'universal' musician among us, André Rieu's name would surely be among that pantheon. Most associated with the hedonistic era of the waltz, his own tastes range widely, from chamber music to pop, and with his Johann Strauss Orchestra he has probably done more than any other musician in our century to share his joy of music with the world at large. " - Cyrus Meher-Homji

Bach To The Future