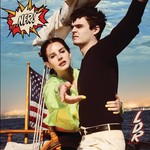 NFR was mainly produced and co-written with Jack Antonoff and includes 'Venice Bitch,' 'Mariners Apartment Complex,' 'hope is a dangerous thing for a woman like me to have - but I have it,' and a cover of Sublime's 'Doin' Time'.

Lana describes the album as "in the vein of a Laurel Canyon sound, and it's kind of transformed a little bit because there's some surf elements to some of the songs - it's not really surfy like Dick Dale but a lot of electric guitar, a little Red Hot Chili Peppers influence in there."

"Over five albums, Del Rey's sound has swung between glacial, expansive rock and cabaret and glossy trip-hop. Rockwell plunges deeper into the first mode, with the producer Jack Antonoff forgoing the '80s synth shimmer he's known for. Del Rey's lyrics-always a serial-killer-note collage of quotations-reference Baby Boomer rock and So Cal hip-hop. But musically, Rockwell more so channels patient, spaced-out troubadours across generations-Simon and Garfunkel, Mazzy Star, Built to Spill-with a hint of anthemic pop. Against smearing guitar, piano, and horns, Del Rey sings with recital-ready stateliness, even though her melodies are quavering and fragile." - The Atlantic

1. Norman fucking Rockwell
2. Mariners apartment complex
3. Venice bitch
4. Fuck It I Love You
5. Doin' time
6. Love song
7. Cinnamon Girl
8. How to disappear
9. California
10. The Next Best American Record
11. The greatest
12. Bartender
13. Happiness is a butterfly
14. hope is a dangerous thing for a woman like me to have - but I have it

All The Light Above It Too
more suggestions…