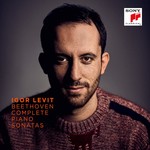 Igor Levit - the recent recipient of the prestigious Gilmore Artist Award and the Royal Philharmonic Society's "Instrumentalist of the Year"- has now completed the recording of all 32 sonatas of Ludwig van Beethoven. In September 2019 this mammoth studio-recording project will finally be released and leads the way for important new releases on Sony Classical for Beethoven's 250-year anniversary.

Igor Levit, exclusive artist with Sony Classical says: "For me, this recording is a conclusion of my past fifteen years. The literally life-changing encounter with the Diabelli Variations at the age of 17, which is effectively still ongoing, the daily engagement with Beethoven's sonatas, with Beethoven as a person, with myself, with the world in which I live - all that has also led to this recording. What I started in 2013 with the last five sonatas, I can now conclude. It fills me with great happiness and at the same time feels like a new beginning. " Per Hauber, Managing Director Sony Classical says: "Every release of Igor Levit is an event in itself. That this major release is now spearheading the Beethoven anniversary celebrations will, we anticipate, launch the global festivities commemorating one of humanity's most important artistic figures. To accompany Igor Levit on this long and wonderful path to his complete recording of the Beethoven Sonatas was an unforgettable experience for all of us at Sony Classical."

"This adds up to a strong, keenly argued, entirely consistent cycle...One of Levit's most notable virtues is his ability to look inward, lighting up even a few bars here and there within the most outgoing movements...No cycle of the Beethoven piano sonatas is ever going to tell the whole story, but Levit is unfailingly alive, thoughtful and rewarding at every turn." Financial Times

"The piano sound is wonderfully consistent throughout the nine discs and conveys every gradation of Levit's pearly sound world...But there does seem to be a distinct difference of approach between the earlier deeply considered, thoughtful accounts and some of what one hears in his treatment of the earlier sonatas, where tempi seem more extreme, and the music is given less space to breathe." Guardian

"For starters, Levit possesses a clear, virile, and well-balanced sonority from bottom to top, yet he's never afraid to roughen up his sound to impart more visceral impact to the composer's frequent sforzandos, consequently underscoring the music's brasher qualities. Second, Levit's superb technical facility allows him to vary his articulation according to Beethoven's specifications with little help from the sustain pedal, as the Op. 31 and Op. 81a sonatas' outer movements vibrantly bear out, or in the Op. 2 No. 3 Allegro assai's rapidly fluttering right-hand runs and the fleet yet magnificently controlled Waldstein and Appassionata finales." 10/10 Classicstoday

"What you will get is a new sense of the sheer physicality of the music…What's fascinating about Levit's whole cycle is the crazy tempos at which he takes the first Allegros and Prestos…Where savagery is required, Levit provides it in spades…Not a definitive cycle, then, but with this music no cycle could ever be that; it's enough that this one should delight, provoke and intrigue in equal measure" Instrumental Choice BBC Music December 2019

"As you'd predict from an artist who combines acute intelligence and technical panache, it's utterly absorbing. It's also a cycle that doesn't have favourites - Levit feels equally committed to every single piece…Above all there's that sense of being completely at one with Beethoven himself. And that, in the end, is what makes this such a magnificent achievement." Gramophone Awards 2020 WINNER - Instrumental