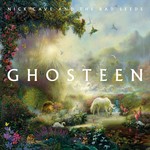 Ghosteen is the follow-up to the acclaimed 2016 album 'Skeleton Tree'.

The double album features 8 songs on 'Part 1', and 'Part 2' consists of two long songs, linked by a spoken word piece.

"You might have thought bereavement might have unleashed a raging, vengeful beast within Cave - there is a cougar on this album, prowling the perimeter of a California compound, "with a terrible engine of wrath for a heart", but it is the sole irruption here of the old, Old Testament Cave...Ghosteen completes a trilogy of records connected by their sound: Push the Sky Away (2013), Skeleton Tree and Ghosteen are all keening, subliminally orchestral works, swirling with electronic mood music; they supersede the rock format and solo piano of previous Bad Seeds or Cave solo works, underscoring the cornerstone presence of violinist Warren Ellis, who also provides revelatory backing vocals." - Guardian

"perhaps the most straightforwardly beautiful set of songs that Nick Cave and the Bad Seeds have ever recorded...Listening to Ghosteen, it's very hard indeed not to be taken aback." (The Guardian, again)

"An astonishing record." (The Independent)

Based On a True Story
more suggestions…