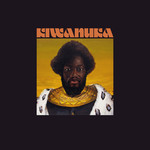 Recorded in New York, LA and London, KIWANUKA reflects his "ear for musical adventure". Given the amount of critical and commercial praise that showered his last record, the last two years have found the singer-songwriter questioning his own ability and musical identity. How do you follow a record that achieved everything you have ever wanted to achieve?

Imposter syndrome aside, KIWANUKA brims with confidence and channels an assortment of the late greats, with nods to Gil Scott-Heron, Bobby Womack and Otis Redding, moving further away from the folk-imbued vintage soul of his debut album, Home Again, back in 2012.

"The last album came from an introspective place and felt like therapy, I guess," explains Kiwanuka in an official statement.

"This one is more about feeling comfortable in who I am and asking what I want to say. Like, how could I be bold and challenge myself and the listener? It is about self-acceptance in a more triumphant rather than melancholy way. It's an album that explores what it means to be a human being today."

"When I first signed a record deal, people would ask me, 'So what are you going to be called?'. And I never thought of that; calling myself Johnny Thunders or whatever, like singers from the past. So, on this album it's kind of a defiant thing; I'm engaging with who I am and I'm not going to have an alter ego, or become Sasha Fierce or Ziggy Stardust, even though everyone's telling me I need to be this, that or the other. I can just be Michael Kiwanuka."

Come On Up To The House: Women Sing Waits

The Ghost Of Freddie Cesar