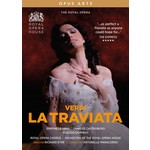 Verdi based La traviata on Alexandre Dumas fils's novel and play La Dame aux camélias, inspired by the life and death of the real Parisian courtesan Marie Duplessis. One of the most popular of all operas, the 2018/2019 season featured 151 productions of La traviata performed worldwide. Verdi's sublime score contains some of his most inspired arias and duets. Ermonela Jaho stars as Violetta, opposite Charles Castronovo as Alfredo, with Plácido Domingo as his unyielding father in Richard Eyre's classic production, featuring stunning naturalistic designs by Bob Crowley. This production is recorded in High Definition and true Surround Sound.