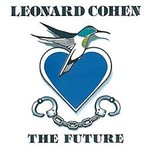 The star procession flowed over a garish red carpet and into the Dorothy Chandler Pavilion for the 1992 Academy Awards. Amid the swell of celebrated people, Leonard Cohen (who arrived on the arm of his lover and occasional coarranger, Rebecca De Mornay) went wholly unnoticed. It suited him fine. Cohen hovers above popular success. He comes and he goes, from time and from place, like a shadow. Once an isolated romantic who wrote intensely personal poems and set precedent for modern brooders like Morrissey, Cohen is now third person omniscient.

The Future, Cohen's eleventh album, is epic. In the late Sixties, he wrote detailed stories of fleeting moments by rivers or in hotel rooms. Now that he's fifty-eight, his themes are political and cultural, sweeping. His deep, sepia-toned voice has always lent his love songs a haunting intimacy. When on "So Long, Marianne" (from Songs of Leonard Cohen, 1968) he sang. "Your letters they all say that you're beside me now/Then why do I feel so alone? I'm standing on a ledge/And your fine spider web/Is fastening my ankle to a stone," he captured love's ambivalence. His voice deeper still on this nine-track album, Cohen explores the world with the same precision with which he's studied the rumpled sheets of many unmade beds.

On "Democracy," which starts with a drumroll and tumbles into a march, Cohen questions America's premise with wit and Canadian objectivity: "It's coming from the sorrow on the street/The holy places where races meet/From the homicidal bitchin' that goes down in every kitchen/To determine who will serve and who will eat/From the wells of disappointment where the women kneel to pray/For the Grace of God in the desert here/And the desert far away/Democracy is coming to the U.S.A." His creepy growl sounds like Tom Waits, only with better enunciation. His lazy phrasing lets the words seep instead of attack.

The album's two borrowed songs - the obscure "Be for Real" and Irving Berlin's classic "Always" - are simple tunes complicated by the songs that surround them. Amid spiritual emptiness ("Closing Time"), personal disillusionment (the wrenching "Waiting for the Miracle") and occasional schmaltz (the overwrought "Light as the Breeze"), lyrics like "I'll be loving you, always/With a love that's true, always" are almost laughably quaint. Sung in a bluesy, barroom style, they're made ironic. "Be for Real" cries, "I don't want to be hurt by love again" - funny coming from the man who wrote the book on despair and loss.

The title track, a rocker with a gospel chorus, describes the advanced decay of our society. Cohen sings, "Give me crack and anal sex/Take the only tree that's left and stuff it up the hole in your culture/Give me back the Berlin Wall/Give me Stalin and St. Paul/I've seen the future, brother: It is murder." He's nostalgic for order and boundaries; without them, where does anyone belong? When the forbidden becomes commonplace, there is no mystery, no chance for illicit pleasure or even romance. Chaos negates freedom. Apocalyptic mood established, he sings, "The blizzard of the world has crossed the threshold/And it has overturned the order of the soul/When they said repent, I wonder what they meant."

The album closes with "Tacoma Trailer," an instrumental (in which Cohen's voice is replaced by the moans of an upright bass) that stretches out, vast and desolate, like a wasteland. Cohen, who has published two novels and more verse, has a great command of language and form. That gives him the freedom to move gracefully - from Montreal to Hollywood or from classics to folk music and finally, on this track, to silence. The Future might as easily have been a book: A more troubling, more vexing image of human failure has not been written.
4 / 5 Rolling Stone Magazine