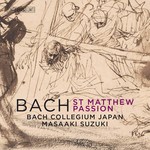 Masaaki Suzuki and his Bach Collegium Japan made their first recording of the St Matthew Passion in March 1999. Twenty years later, in April 2019, it was time once again, as the singers and players gathered in the concert hall of the Saitama Arts Theater in Japan. 'A profound joy' is how Masaaki Suzuki describes his emotion at the opportunity to record Bach's great fresco of Christ's Passion for a second time. And this time, he and his ensemble have brought with them into the concert hall a profound and collective familiarity with Bach's choral music, after having recorded more or less all of it in the meantime, including the complete sacred cantatas. For his Evangelist, Suzuki has selected the young German tenor Benjamin Bruns, making his first appearance on BIS. Among the other soloists are familiar names including Carolyn Sampson, Damien Guillon, Makoto Sakurada and Christian Immler.

2-disc set with a 100-page booklet, packed in a cardboard box.

"The soloists (instrumental and vocal) on this recording are all strong. Of note must be the newly-constructed organ (for use in the continuo) built by Marc Garnier largely under Suzuki's direction to come as close as possible to the larger instrument installed on the west gallery in Baroque churches, and not the smaller positiv, which we often hear. What a rich, rounded, full and impressive organ sound it is. It, too, has an immediacy and directness in the all-important continuo, but also a delectable ampleness elsewhere and is played by Suzuki's son Masato....This one must now be considered as standing proud near the very top; it is heartily recommended without hesitation." (MusicWeb Recommended)

"As a follower of BCJ/Masaaki Suzuki for many years I feel right to claim this St Matthew Passion as one of their very best recordings. Suzuki's directs with experience and maturity an ensemble at the height of its powers. The soloists are all excellent. Some give a youthful energy, performing Bach for the next generation. But I can hear that this is still deep, rich Bach....Highly recommended."
Nicholas Butler/Marbecks

"It's fascinating how much his two recordings have in common…what principally differentiates the two sets are the solo singers…Benjamin Bruns's Evangelist and Christian Immler's Christus are compelling, Carolyn Sampson floats a gloriously gravity-free 'Aus liebe' and Immler's burnished 'Kom süsses Kreuz' is eloquently embellished with Jerôme Hantaī's soulful gamba. If the opening chorus doesn't quite set us up for the enormity of what is to come, what lies beyond is not without some cherishable compensations" BBC Music

"The lingua franca of this recording is Suzuki's incessantly perceptive blend of directly projected imagery and inward devotion, underpinned by theatrical fervour in the narrative; one never doubts Bach or Suzuki's belief in its importance for mankind. The musicians convey it with infectious zeal...Generic early music politesse is relegated to the shadows" Gramophone Awards 2020 WINNER - Choral

Vaughan Williams: The Lark Ascending / Fantasia On A Theme, etc