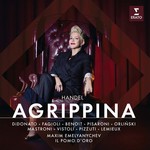 "Maxim Emelyanychev leads Il Pomo d'Oro with something approaching controlled glee, with recits savored as much as arias. Move over other recordings of this opera: this is the champ." ClassicsToday 10/10

Joyce DiDonato has staked a powerful claim on the multi-faceted title role of Handel's opera Agrippina. In the words of The Telegraph, she sings it with "authority, grandeur and high style". She recently performed it to critical acclaim at The Royal Opera House, Covent Garden with Maxim Emelyanychev, Chief Conductor of Il Pomo d'Oro. Joining them on this recording is a cast of established and rising stars that includes Marie-Nicole Lemieux, Franco Fagioli, Luca Pisaroni, Elsa Benoit and Jakub Józef Orliński.

"Joyce DiDonato is a mezzo at the height of her powers, and she brings force to the title role in this modern take on Handel" Financial Times

"DiDonato is mistress of all she surveys as his scheming empress, with an expressive palette and tonal beauty to match the finest Handelians, as well as enviable breath control. Emelyanychev sets the seal on an outstanding set with conducting that sizzles with theatricality." Sunday Times

"Agripinna was composed by Handel in his early twenties, already at the height of his powers. It is an epic opera with many sumptuous arias. This is a superb recording, not to be missed. Il Pomo d'Oro lead by Maxim Emelyanychev, and Joyce DiDonato with a stellar cast of soloists, are first rate performers. Highly recommended." - Nicholas Butler/Marbecks

"Maxim Emelyanychev leads Il Pomo d'Oro with something approaching controlled glee, with recits savored as much as arias. Kudos to first oboist as well. The engineering is perfect and so is the balance; voices and instruments shine and intermingle. Move over other recordings of this opera: this is the champ." ClassicsToday 10/10

"I can't imagine a finer Agrippina today than Joyce DiDonato. Technically she can move from a whisper/whimper to a roar-give a listen to her work on the great aria "Pensieri…." She begins the aria's da capo an octave lower than written and pianissimo; she sounds like the saddest cello in the world. And when she roars, all hell breaks loose, with rapid-fire coloratura always accurate and always serving a dramatic purpose. She can wheedle, cajole, and menace-the very definitions of Agrippina's character. Wow. In "Se vuoi pace", in which she seems to be reconciling with Claudio, her smooth legato is ravishing, and the way she toys with Narciso and Pallante is wickedly funny." ClassicsToday 10/10

"Benoit is a delectable Poppea, both knowing and sympathetic…Orliński sings with rounded tone and a sure feeling for Handelian line…Emelyanychev's direction of his responsive band combines fizzing theatrical energy with due regard for the opera's more reflective moments. With DiDonato nonpareil in the title-role and a uniformly strong cast, this now becomes a first choice for Handel's Venetian masterpiece." Gramophone Awards 2020 WINNER - Opera