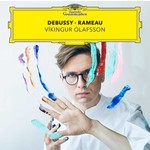 Debussy is most often called an impressionist. "People get lost a little bit in sound for the sake of sound", Ólafsson comments. But the composer was also "a real perfectionist... there is this incredibly refined structure at work." Rameau, "the bad boy of the French baroque", likewise combined a strong sense of structure with a fondness for breaking conventions: "He broke the rules and paved the way for new ideas, new creativity, new spontaneity." What unites the two composers, Ólafsson comments, is "a kind of freedom and discipline, juxtaposed". The album Debussy & Rameau alternates music by the two composers, creating an enthralling dialogue between them. Works are drawn from across both composers' careers, with the Debussy selection including well-known miniatures such as La Fille aux cheveux de lin as well as the less familiar Prelude to La Damoiselle élue arranged for piano solo.

Rameau's works are mainly drawn from his Pièces de clavecin collections of between 1724 and 1741. One of the album's centrepieces is Ólafsson's own Rameau arrangement The Arts and the Hours. Ólafsson's album concludes with a piece that connects the two composers directly: Debussy's Hommage à Rameau from Images book 1, a moving sarabande written as a tribute from one rule -breaking composer to another.

"It could have been a triumph of style over substance but, like the Bach, the programming here is truly inspired...Where else could Ólafsson end but with 'Hommage à Rameau' from Images, Book 1? It not only brings the two composers together but offers the perfect distillation of all that has gone before." Gramophone Editor's Choice April 2020

"He's done it again…it is clear from the outset that this is no lazy selection of favourites…His playing never feels self-indulgent of inappropriate…There is never any doubt that this is Ólafsson's vision of Rameau and Debussy, but it is also clearly rooted in love for each and their intertwining opens the eyes and the ears, highlighting especially that, like Bach, Rameau's music is fertile ground for pianists" BBC Music Recording of the Month June 2020

"Each piece sounds a brightly polished jewel in Olafsson's hands, his fingerwork emulating the plucked sound of the harpsichord in the Rameau, his impressionistic flourishes in Debussy Préludes complementing each other to perfection. Exhilarating" Sunday Times

Debussy: Serenade for the Doll

Debussy: The Snow is dancing (from Children's Corner)

Rameau: The Arts and the Hours

Silk Road Journeys: Beyond the Horizon