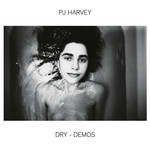 First released in 1992, Harvey's landmark debut was described as "a seductive calling card that signals the arrival of an extraordinary new artist" by The Los Angeles Times.

Released to worldwide critical acclaim on 30 March 1992 it was recorded at The Ice House in Yeovil and features the singles 'Dress' and 'Sheela-Na-Gig.' Dry saw PJ Harvey burst onto the global stage to begin her unique path to stardom. The Los Angeles Times' Robert Hilburn describing the record as "… a seductive calling card that signals the arrival of an extraordinary new artist." The NME said, "Polly dredges these sounds from the pit of her dissected soul and drags them out of her mouth with clenched fists", while Pitchfork said, "On her debut, Polly Jean Harvey matched Patti Smith's incandescence with Bessie Smith's lasciviousness, outplayed everyone on the British indie circuit, and became an instant star."

Dry-Demos, previously released with Dry almost 30 years ago, is now available for the first time as a stand-alone LP release.