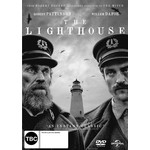 From Robert Eggers, the visionary filmmaker behind modern horror masterpiece The Witch, comes this hypnotic and hallucinatory tale of two lighthouse keepers (William Dafoe and Robert Pattinson) on a remote and mysterious New England island in the 1890s.

As an approaching storm threatens to sweep them from the rock and strange apparitions emerge from the fog, each man begins to suspect that the other has become dangerously unmoored.

"The longer the film goes on, the weirder it gets and the more it resembles a sitcom - The Odd Couple in sou'westers, a droll symphony of bodily functions, bubbling friction and all manner of desires that dare not speak their name." - Financial Times

"The visceral, disgusting, and irrefutably maddening theatrics of The Lighthouse are entrancing enough to have viewers happily giving themselves over to a beckoning siren by film's end." - Chicago Reader