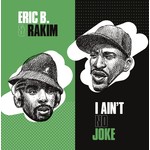 Craft a record iconic enough and, no matter what you've sampled to make it, you're destined to be sampled more yourself.

People's first exposure to this track was on the landmark 'Paid in Full' album, and it was clear this had the potential to jump off as a single. The repetitive, simply scratched sample of 'Pass the Peas' by the JB's was an infectious ear worm that needed a truly strong MC to stand up to it. Rakim did more than that. He spun timeless lyrics and lines that would go on to be sampled and referred to dozens of times down through hip-hop history.

Of course, you can't have Eric B & Rakim without Eric B. The DJ gets his time to shine on the flip, and while he isn't a man renowned for his dexterity and turntablist skills, the track still knocks.

This reissue comes with a brand-new cover utilising some of Dan Lish's trademark artwork.