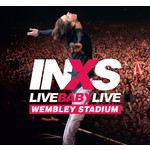 $50.00 In stock with supplier
ETA: 4-7 business days add to cart more by this artist

On Saturday 13th July 1991 INXS, one of the world's most revered and iconic bands, delivered the gig of their lives at London's Wembley Stadium to 74,000 ecstatic fans. After a decade and a half on the road the band were at the peak of their live powers and the performance filmed that day shows they were not only a world-class stadium band but the only band that ever had the guts to walk onto the stage at Wembley Stadium in front of 74,000 people and jam their own intro! The band played over 2000 shows before singer Michael Hutchence's un­timely passing 20 years ago, but Wembley was THE ONE, not only were the band on fire, but the audience was too, both band and crowd knew this would be the performance of a lifetime. What's more there were no screens, no ramps, no backing singers, no props and cell phones just six guys playing as though their lives depended on it. INXS delivered hit after hit to an ecstatic audience for nearly two hours!