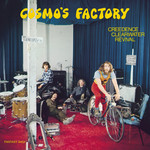 "It should be obvious by now that Creedence Clearwater Revival is one great rock and roll band. 'Cosmo's Factory', the group's fifth album, is another good reason why." - Rolling Stone, 1970

50th anniversary pressing of iconic studio album from America's greatest rock and roll band; first released in 1970 at the peak of Creedence's pro­lific career. Includes the Billboard Top 10 hits "Who'll Stop The Rain," "Travelin' Band," "Run Though the Jungle," "Up Around The Bend," "Looking Out My Back Door" and "Long as I Can See The Light" as well as the enduring favorites, "As Long as I See The Light" and the remarkable cover of Marvin Gaye's "I Heard It Through The Grapevine." The album was mastered at halfspeed at Abbey Road Studios, benefiting from an exacting process that allows for an exceptional level of sonic clarity and punch. This 180-gram audiophile-quality vinyl comes housed in a tip-on jacket replicating the original pressing packaging.

A:
Ramble Tamble
Before You Accuse Me
Travelin' Band
Ooby Dooby
Lookin' Out My Back Door
Run Through the Jungle

B:
Up Around the Bend
My Baby Left Me
Who'll Stop the Rain
I Heard It Through the Grapevine
Long As I Can See the Light