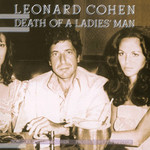 The day Leonard Cohen and Phil Spector decided to make an album together marked the beginning of one of the most controversial partnerships in either man's career.

Over the course of three weeks, the pair had written 15 new songs, a selection of which ended up on the 1977 album Death Of A Ladies' Man.
It is true that a cursory listen to the album suggest that the whole thing was simply a ragbag of crazy notions thrown into the air to see where they landed. But if you pay attention, it'll quickly make sense.

The brawling "Memories" bowls along like an echo-laden vaudeville drinking song. Meanwhile, "Iodine" swings on one of Nino Tempo's most seductive rhythm arrangements, and anybody looking for a dance could turn to "Don't Go Home With Your Hard-On", which not only captures an almost irresistible funk edge, but also roped Bob Dylan and Allen Ginsberg into its rambunctious backing chorus.

Even though Cohen himself wasn't crazy about the outcome, he trusted Spector's judgement. And good for him: Alongside Songs Of Love And Hate, it represents the peak of Cohen's first decade as a recording artist, both lyrically and stylistically stepping into wholly untapped musical directions. Death Of A Ladies' Man might even be his masterpiece…