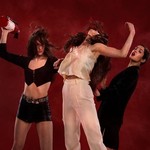 Marie Davidson is back with a new album, a new band, and a bold new sound under the banner of Marie Davidson & L'Œil Nu - a trio formed of friends and collaborators with shared roots in Montreal's DIY scene: Marie, Pierre Guerineau and Asaël R. Robitaille.

Together they have produced an album of lush, sleek pop tracks which are elevated by Davidson's trademark wit and wry lyrical content.

Drawn to the idea of the eternal return, they deliver a forward facing, innovative pop record that builds on the classic tenets of Marie's music to create something that strikes out towards a broader audience in wildly imaginative directions.

Sonically, Renegade Breakdown is different to previous Marie Davidson releases. Davidson and her bandmates draw heavily from styles like 60s chansons, dream pop and jazz-tinged balladry to create an alluring set of leftfield pop for the twilight hours.

"We wanted to make songs, like the music we've been enjoying altogether for more than a decade," says Marie.

Throughout the album Davidson & L'Œil Nu never allow the listener to get too comfortable, meaning that, while Renegade Breakdown may sound luxurious, there is a playfulness about it which always keeps you on your toes.