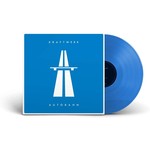 The fourth studio album by the German electronic band Kraftwerk.

With its iconic Emil Schult sleeve, Kraftwerk release their international breakthrough album. The symphonic title track, an epic ode to the joys of motorway travel, wraps a mesmerising motorik rhythm around a sampled collage of car horns, engine noise, whirring tyres and radio crackle. In edited form, it becomes a revolutionary hit single around the world. Elsewhere, in wordless industrial folk music, the band reveal both their light and dark sides - "Mitternacht" is all creeping midnight shadows, while "Morgenspaziergang" is fresh with morning dew and birdsong. Two versions of "Kometenmelodie", one a starkly gothic prowl, the other a sunny electro boogie, provide further instrumental sound paintings.