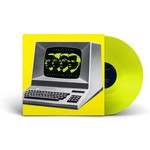 Eighth studio album by the German electronic band Kraftwerk, originally released in May 1981.

Computer World deals with the themes of the rise of computers within society. In keeping with the album's concept, Kraftwerk showcased their music on an ambitious world tour and issued several different versions of the single 'Pocket Calculator' in different languages.