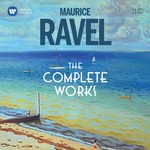 Maurice Ravel's music reflects the cultural and creative ferment of his times, as the heady sensuality of the Belle Époque made way for neo-classicism, the Jazz Age and modernism. Strikingly diverse in mood and scale, his works assert his distinctive identity, expressed through craftsmanship of the utmost finesse and beauty: deeply sensitive and balancing sincerity, irony and a touch of provocation. An essential collection of landmark performances, this 21-CD box of Ravel's complete works brings together major interpreters of the present day and preceding generations. There are even contributions from the composer himself, as conductor, pianist (on piano rolls) and artistic supervisor.

As meticulous as he was brilliant, Ravel was not a prolific composer, but his output was diverse: works for solo piano (a number of which he also orchestrated); ballet music (including Daphnis et Chloé with its spectacular 'Sunrise') and a variety of other orchestral scores; two piano concertos; chamber music; songs (with piano and with orchestra); two operas, and (early in his career) cantatas and choral works. His orchestration of Mussorgsky's piano suite Pictures at an Exhibition has become the best-known version of the work. Hispanic and 'exotic' cultures hold a significant place in his output.

Ravel's music matches craftsmanship, structure and finesse with often striking sensual beauty, and it frequently balances sincerity with irony and wit with sentiment. His ear for instrumental colour was phenomenal and his orchestration often breathtaking.

Ravel's 40-year career coincided with a period of exceptionally rich cultural activity and evolution. This is reflected in his music, which develops from late-Romanticism and so-called 'impressionism' to incorporate aspects of neo-classicism, jazz and Machine Age modernism. Bolero has been credited with looking forward to the minimalism of the late 20th century.