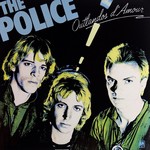 'Outlandos d'Amour' is the debut studio album by English rockers The Police, originally released in November 1978.

The album featured the hit lead single, "Roxanne," peaked at No 6 on the UK Albums Chart (No. 23 in the US), and has since been certified platinum by the RIAA for sales of over one million units in the United States.

Side 1:
Next to You
So Lonely
Roxanne
Hole in My Life
Peanuts

Side 2:
Can't Stand Losing You
Truth Hits Everybody
Born in the '50s
Be My Girl Sally
Masoko Tanga