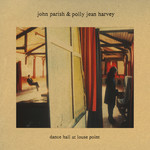 Reissue on vinyl of the first collaboration album between PJ Harvey and John Parish - Dance Hall At Louse Point. Produced by Parish and Harvey, and originally released in September 1996, Dance Hall At Louse Point features the single 'That Was My Veil'. Reissue is faithful to the original recording with vinyl cutting by Jason Mitchell at Loud Mastering, overseen by John Parish.

Side A
1. Girl
2. Rope Bridge Crossing
3. City Of No Sun
4. That Was My Veil
5. Urn With Dead Flowers In A Drained Pool
6. Civil War Correspondent