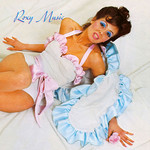 Although no musician demonstrates much technical skill at this point, they are driven by boundless imagination -- Brian Eno's synthesized "treatments" exploit electronic instruments as electronics, instead of trying to shoehorn them into conventional acoustic patterns. Similarly, Bryan Ferry finds that his vampiric croon is at its most effective when it twists conventional melodies, Phil Manzanera's guitar is terse and unpredictable, while Andy Mackay's saxophone subverts rock & roll clichés by alternating R&B honking with atonal flourishes.

But what makes Roxy Music such a confident, astonishing debut is how these primitive avant-garde tendencies are married to full-fledged songs, whether it's the free-form, structure-bending "Re-Make/Re-Model" or the sleek glam of "Virginia Plain," the debut single added to later editions of the album. That was the trick that elevated Roxy Music from an art school project to the most adventurous rock band of the early '70s.
4.5 / 5 All Music Guide.

Side A:
Remake/Re-Model
Ladytron
If There Is Something
2 H.B.

Side B:
The Bob (Medley)
Chance Meeting
Would You Believe?
Sea Breezes
Bitters End