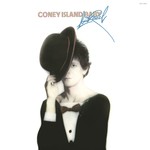 The album has been described by Anthony DeCurtis as "perhaps the most romantic album of Reed's career." Many of the album's songs were inspired by and dedicated to Reed's girlfriend and muse at the time.

Coney Island Baby was "as much a love letter to Rachel as it was to the nostalgic Coney Island of the mind." The album's title track directly references Rachel with the line: "I'd like to send this one out to Lou and Rachel, and all the kids at P.S. 192."

The album includes the song "She's My Best Friend," a version of which was originally recorded by Reed's band the Velvet Underground in 1969.