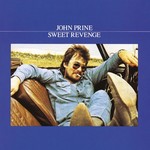 Back in 1973, John Prine released his third album Sweet Revenge. It starts with the title track "Sweet Revenge," one of Prine's most famous tracks.

The majority of the album was recorded in Nashville, apart from the track Dear Abby, taken from a live performance at New York's State University. It features Prine chatting to the crowd giving a prelude to the track, as well as the crowd reaction highlighting the wittiness and genius of his lyrics.

Recut on 180-gram vinyl by Kevin Gray at Cohearent Audio.

A1. Sweet Revenge
A2. Please Don't Bury Me
A3. Christmas in Prison
A4. Dear Abby
A5. Blue Umbrella
A6. Often Is a Word I Seldom Use
B1. Onomatopeia
B2. Grandpa Was a Carpenter
B3. The Accident (Things Could Be Worse)
B4. Mexican Home
B5. A Good Time
B6. Nine Pound Hammer