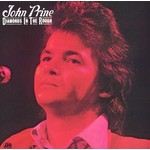 Following his self-titled debut album in 1971, John Prine returned the following year with his second studio album Diamonds In The Rough.

Prine's songwriting was on form as ever, writing timeless classics such as Souvenir and the anti-war song The Great Compromise. The album also featured fellow folk singer-songwriter Steve Goodman on guitar and harmonies, as well as John's brother Dave Prine playing mandolin, fiddle, banjo and supplying backing vocals.

A1. Everybody
A2. The Torch Singer
A3. Souvenirs
A4. The Late John Garfield Blues
A5. Sour Grapes
A6. Billy the Bum
A7. The Frying Pan
B1. Yes I Guess They Oughta Name a Drink After You B2. Take the Star Out of the Window
B3. The Great Compromise
B4. Clocks and Spoons
B5. Rocky Mountain Time
B6. Diamonds in the Rough