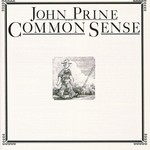 Produced by Booker T. & the M.G.'s guitarist and songwriter Steve Cropper, the album features a number of headline collaborators such as Bonnie Raitt, Jackson Browne and Glenn Fray; as well as Steve Goodman continuing to feature with Prine. Tracks such as "Forbidden Jimmy" and "Saddle In The Rain" show a slight change in Prine's sound with Cropper's production. The album also features a cover of Chuck Berry's "You Can Never Tell."

Recut on 180-gram vinyl by Kevin Gray at Cohearent Audio.

A1. Middle Man
A2. Common Sense
A3. Come Back to Us Barbara Lewis Hare Krishna Beauregard
A4. Wedding Day in Funeralville
A5. Way Down
B1. My Own Best Friend
B2. Forbidden Jimmy
B3. Saddle in the Rain
B4. Quiet Man
B5. He Was in Heaven Before He Died
B6. You Never Can Tell