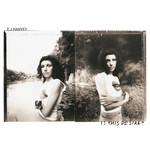 PJ Harvey
Is This Desire? (LP)

Reissue on vinyl of the fourth PJ Harvey studio album Is This Desire?. Produced by PJ Harvey with Flood and Head, and originally released in September 1998, Is This Desire? features the singles 'A Perfect Day Elise' and 'The Wind'.

The reissue is faithful to the original recording and package, cutting by Jason Mitchell at Loud Mastering under the guidance of longtime PJ Harvey producer Head