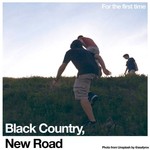 Side B
Sunglasses
Track X
Opus