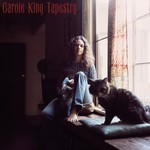 In honor of the 50th Anniversary of Carole King's iconic album, Tapestry, this February 2021 - Legacy is excited to be reissuing the album on Vinyl!

Tapestry is the second studio album by singer-songwriter Carole King, released in 1971 on Ode Records and produced by Lou Adler. It is one of the best-selling albums of all time, with over 25 million copies sold worldwide. In the United States, it has been certified Diamond by the RIAA with more than 10 million copies sold. It received four Grammy Awards in 1972, including Album of the Year. The lead singles from the album-"It's Too Late" and "I Feel the Earth Move"-spent five weeks at number one on both the Billboard Hot 100 and Easy Listening charts.