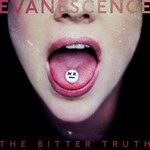 'The Bitter Truth' is the 5th studio album from Evanescence and includes the epic tracks 'Wasted on You', 'Use My Voice', 'The Game Is Over' and new single 'Yeah Right'.

Evanescence's forthcoming new album and first containing all new material in nearly a decade. promises fans more of the heavy, vocal-driven, and expertly-orchestrated rock & roll for which Evanescence is known.

The Bitter Truth takes its foundation in the epic, signature sound that has earned Evanescence two GRAMMY awards and more than 23 million album sales worldwide beginning with their landmark debut 'Fallen,' and blends it with the thought-provoking lyrics, musical sophistication, and heavy themes that Amy Lee has become known for.

Producer Nick Raskulinecz (Foo Fighters, Rush, Deftones) has been tracking with the band in Nashville since late January. In a break from the past, the band will be rolling out a series of songs from the album incrementally, culminating in the release of the full album.