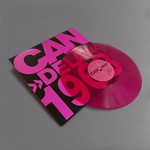 Can was founded in 1968 by Irmin Schmidt, Holger Czukay, Michael Karoli and Jaki Liebezeit who formed a group which would utilise and transcend all boundaries of ethnic, electronic experimental and modern classical music.

This classic album of tracks recorded at the beginning of Can's life, and features original vocalist Malcolm Mooney.

Thief is now a rejuvenated Can classic having been covered by Radiohead and since then discovered by a new generation of fans.
Can's powerful influence has never diminished, and their indelible mark is apparent in the bands who freely acknowledge their importance - from Portishead, James Murphy, New Order, Factory Floor, Public Image Ltd, Mogwai, Kanye West and Radiohead - as well as across other disciplines such as visual art and literature.