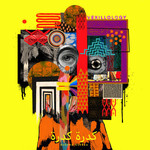 Named as Bandcamp's March 2021 LP of the Month and also picked in Mixmag's best of the year (so far) Vexillology has landed! "

"Moroccan artist Guedra Guedra makes dance music indebted to the Berber culture of his homeland as well as taking influence from across the rest of North Africa too. Forthcoming debut album 'Vexillology' is built from field recordings, samples and non-Western rhythms, with explosive lead track 'Archetype' a not-so-subtle hint that this will be one of the most ingenious LPs of the year." - Mixmag on the single Archetype

On the Corner presents this shakedown rawkus that follow's on from Son of Sun, the producer's sold out debut EP.

Buckle up and ride out Guedra Guedra's dance of bass-augmented-reality.