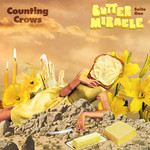 Adam Duritz and Counting Crows are returning with Butter Miracle: Suite One.

For more than two decades, the GRAMMY and Academy Award-nominated rock band Counting Crows have enchanted listeners worldwide with their intensely soulful and intricate take on timeless rock & roll.

Exploding onto the music scene in 1993 with their multi-platinum breakout album, August and Everything After, the band has gone on to release seven studio albums, selling more than 20 million records worldwide, and is revered as one of the world's most pre-eminent live touring rock band.

A1. Tall Grass
A2. Elevator Boots
A3. Angel Of 14th Street
A4. Bobby and the Rat Kings
B1. August and Everything After (with The London Studio Orchestra)