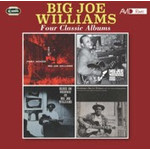 AVID Roots continues with its Four Classic Albums series with a re-mastered 2CD set release from Big Joe Williams complete with original artwork, liner notes and personnel details.
'Piney Wood Blues'; 'Tough Times'; 'Blues On Highway 49' and 'Mississippi Big Joe Williams and his Nine String Guitar'
Born in Mississippi in 1903, Delta blues singer Big Joe Williams was perhaps rather overlooked amongst many of the famous bluesmen who came out of the delta in the 1920s and 1930s. Famed for his unique home-made reconstructed 9 string guitar and assortment of home made or home found percussion instruments, Big Joe must have made quite a sight to his audience with swinging beer cans and pie plates dangling around his acoustic guitar and struggling to compete with his extraordinary voice. Big Joe was the epitome of the travelling blues man having left home as a very young man to earn a living busking and playing wherever he could make a buck, from pool halls to bars and taverns and jook joints. He played with the likes of Pettie Wheatstraw, Robert Nighthawk and Sonny Boy Williamson and was even accompanied by a young Muddy Waters on harmonica during his early travels in the 1930s. Unfortunately, he had to let Muddy go as, according to Big Joe, he was taking all of his female fans away from him! Big Joe recorded for many labels during his long career, but it was signing to Bluebird records in 1935 that set him on his path. Helped in no small way by the inclusion of two blues classics in his repertoire 'Baby, Please Don't Go' and 'Crawling King Snake' both of course taken up by a later generation in the folk blues revival of the 1960s. Big Joe became a festival favourite during the 1960s blues revival and recorded many fine albums during that time, four of which we are proud to present in this collection. He even got to play with Bob Dylan, or should that be Bob Dylan got to play with him, on some duet tracks for Victoria Spivey's own record label. Maybe those who live the longest don't always get the recognition or the cult iconic status of a Blind Blake, Blind Lemon Jefferson, Charlie Patton or Robert Johnson but just take a listen to Big Joe Williams and tell me he doesn't belong amongst the very great Delta blues men. Please note:- We believe the album 'Tough Times' has been unavailable on CD until this release.