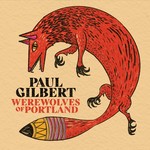 People first heard Paul Gilbert in full flow with the much-respected Racer X. Their 1986 debut album 'Street Lethal' was well received, as was the follow up 'Second Heat' a year later. In 1988, he left the band and helped form Mr. Big, one of the most acclaimed names of the era. Across four studio albums, the foursome gained commercial success, and had a chart-topping US single in 1992 with 'To Be With You'.

'Werewolves Of Portland', Gilbert's 16th studio album, is a remarkable album. It sounds fresh, vital, and certainly takes the listener on a glorious journey.

Because the world went into lockdown early 2020, it wasn't possible to get a band to record in the studio. The result was that Paul plays all instruments on this album: drums (except for ONE snare roll that was too difficult to play), keyboards, bass, and guitar (of course).

1. Hello North Dakota!
2. My Goodness
3. Werewolves of Portland
4. Professorship at The Leningrad Conservatory 5. Argument About Pie
6. Meaningful
7. I Wanna Cry (Even Though I Ain't Sad)
8. A Thunderous Ovation Shook the Columns
9. Problem-Solving People
10. (You Would Not Be Able to Handle) What I Handle Everyday