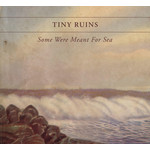 Limited translucent sea green coloured vinyl. A rare blend of eloquent lyrical craft and explorative musicianship, the songs of Tiny Ruins have been treasured by crowds and critics for over a decade. Via an eclectic raft of influences, the musical world of Hollie Fullbrook and band spans delicate folk, lustrous dream pop and ebullient psychedelia.

Born in Bristol and raised in West Auckland, songwriter & multi-instrumentalist Fullbrook's debut LP Some Were Meant for Sea (2011) features her alone, and was quickly celebrated by radio playlists and blogs worldwide. The album's clutch of "gorgeous vignettes" (BBC) put the artist on the map, and she took to the road from her home in New Zealand to tour extensively overseas.

Fullbrook wrote the songs for 'Some Were Meant for Sea' during the previous three years while flatting and studying in Wellington, with many of the songs inspired by the capital city. When a flatmate convinced her to play the songs at a local open mic night, the sound engineer, Samuel Prutton, offered to record Fullbrook's demos. These landed in the lap of Australian indie label Spunk Records' Aaron Curnow, who flew Fullbrook to Sydney to see her play live before signing her to the label.

Some Were Meant for Sea was then recorded, produced & mixed by Greg 'J' Walker (Machine Translations) at the Moyarra School Hall and the Jumbunna General Store, South Gippsland, Australia in December 2010, except for 'Little Notes', recorded & mixed by Hollie Fullbrook & Lieven Scheerlinck in Barcelona, in July 2010.

Side A
1. Old as the Hills
2. Priest with Balloons
3. You've Got the Kind of Nerve I Like
4. Death of a Russian
5. Adelphi Apartments
6. Little Notes
Side B
1. Cat in the Hallway
2. Running Through the Night
3. Just Desserts
4. Pigeon Knows
5. Bird in the Thyme
6. The Oldest Bar in Town (Bonus Track)