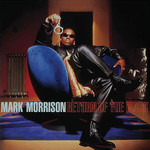 Side A:
Crazy
Let's Get Down
Get High with Me
Moan and Groan
Return of the Mack