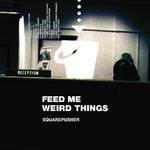 10inch
A - Theme From Goodbye Renaldo
B - Deep Fried Pizza